al-Qa’ida in the Islamic Maghreb (AQIM)

The origins of the al-Qa’ida in the Islamic Maghreb (AQIM) begin with the formation of the Salafist Group for Preaching and Combat (GSPC) in the 1998. At the time the group was formed as an offshoot of another Islamic Algerian guerilla organization based on concerns that brutal killings of civilians were alienating Algerians from the movement’s purpose. The GSPC was designated as an FTO by the U.S. State Department on 27 March, 2002.

GSPC conducted its operations until a joint announcement with al-Qa’ida’s second in command, advertised the GSPC and AQ union on September 11, 2006. The following January GSPC rebranded itself as AQIM. Since then, however, despite its global name partnership and its anti-Western rhetoric, AQIM has remained a regionally focused terrorist group.

In 2007 the newly rebranded AQIM claimed responsibility for the bombings of both the UN headquarters in Algeria as well as the bombing of the Algerian Constitution Court.

Other AQIM activities have included:

AQIM is believed to operate as smaller groups which come together to perform criminal, terrorism or trafficking activities. Such activities include guerilla raids, assassinations, suicide bombings as well as the kidnappings for ransom of aid workers, tourists and employees of multi-national corporations.

AQIM’s recruitment has suffered significantly as a result of indiscriminate attacks against civilians. While AQIM is not as active in its attacks against domestic targets as it once was, it continues to serve as a major hub for trafficking and financial terrorism. AQIM connections in the Sahel allow it to continue to traffic narcotics, cigarettes, vehicles, weapons and people. It is also believed that AQIM maintains connections and coordination with other regional groups such as Boko Haram, al-Shabab and AQAP. Although statements were made to suggest involvement of AQIM in the September 11, 2012 attack on the American Consulate in Benghazi, no unclassified evidence has been presented to support such claims. 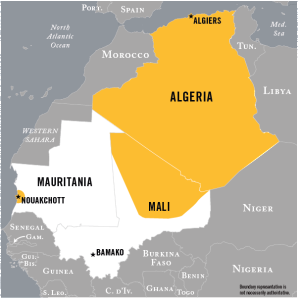